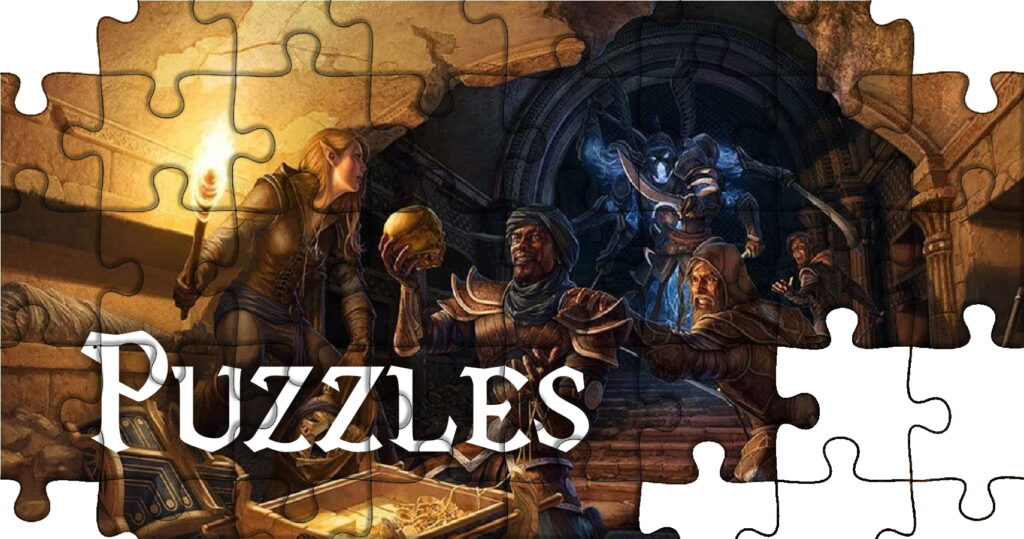 The problem with puzzles in D&D

Puzzles are one of the unofficial staples of D&D, so much so that they could be considered the fourth pillar of Dungeons & Dragons (the other 3 being exploration, combat and role-playing). And truth be told puzzles are fun, for both the players and the DM and there’s nothing wrong with that. But in this article I will try to make a few points on what puzzles are and why you should consider using them more sparingly in your D&D games.

One of the most common sort of puzzle is the riddle which the players usually find scribbled on a wall or on a piece of paper and they have to think of an appropriate answer in order to progress.

You might recognize this kind of puzzle from that one famous scene from Lord of the Rings were Frodo and gang must figure out the secret word (it being the elven word for “friend”) to open the Doors of Durin.

You might already realize the problem with this sort of puzzle and if you don’t, allow me to illustrate. In books and movies, and more generally in linear works of fiction, such a puzzle works to provide some much needed downtime in the middle of scenes where tensions rise.

In D&D, though the purpose might be similar, these kinds of puzzles also tend to take the players completely out of their immersion in order to solve them. That is because they have to think outside the actual game as players and not as their characters. This, of course, can be a lot of fun and if you decide to use it as a relaxing moment in your game it can work splendidly; but be cautious if breaking immersion is not something you actually want to achieve.

This is my personal favorite kind of riddle actually, but even then I’v only actually used it 3 times in my time as a Dungeon Master. The puzzle room works basically like an escape room inasmuch as it’s a room and the characters have to find out a way to proceed, usually by manipulating a mechanism of some sorts.

This kind of puzzle works better in my opinion, because it takes place inside the game world even though the solution still comes from the players instead of their characters. And this is the main reason I’ve used it so sparingly.

It can be really great though, allowing you to sprinkle bits of lore about an ancient civilization for example, deepening your players’ understanding of your world without overly expository descriptions. This is why this kind of D&D puzzle takes up a whole room in the 5 room dungeon.

Puzzles break Immersion; but why?

I’ve quickly analyzed the two main kinds of puzzles that exist in many D&D games and it would seem that the main problem I have with them is that they break immersion; and that is true but I’d like to dig a bit deeper as to what that means.

To do that I’d like to describe a situation. Imagine if you will 3 players. The younger ones are under 25 years old while the 3rd one is 35. The 35 year-old player plays a 9 intelligence barbarian while the other two play a wizard and an artificer respectively.

Which player would most likely be more equipped to solve a riddle? The oldest player would have probably heard a few more riddles in their life, and would have a greater opportunity to recognize a similar one you used in your game.

But if you look at it from the perspective of their characters, the dim witted barbarian just outsmarted a freaking wizard!

If your players are ok with such situation then feel free to use them, but if they have a clear image of their characters, flaws and all, then situations like this can leave a sour taste for all those involved.

Ugh. I really don’t like Intelligence Checks in these situations but let me quickly explain what I mean. There is a common suggestion for the problem I explained in the previous paragraph, that of making low intelligence characters (controlled by the player who solved the riddle) make an Intelligence Check to see if the character has figured out what the player already knows.

I don’t like this at all. Puzzles work best when they’re used as a break from the game; after an exciting combat encounter for example. If the player gains the satisfaction from solving a riddle, it’s really disheartening if they don’t succeed the intelligence check. And the table most likely knows the answer after one of them says it out loud, so the check really makes no sense at all.

This post seems to be anti-puzzle but it’s really not. I just think that DMs should take care when incorporating them into their games because they might not always achieve what they want them to achieve. Ask yourself, what am I trying to do here with this puzzle? Is it just a little bit of fun to ease the tension or am I trying to tell a story? If it’s the former, then puzzles may not be the greatest tool for that purpose.

Tasha's Cauldron of Everything Review | The DM's Journey

[…] a few puzzles that you can throw at your players. As I’ve mentioned in a previous article, I don’t really like puzzles in D&D but if you do, you’ll find these very […]

I find puzzles work best when presenting the characters with a scene that they have to figure out.

For example, have them wake up somewhere without memory of what happened. Have them come across the scene of a murder. Tease them with the town mystery. Or more simply put, the art of dropping characters in the middle of the story.

They then use role play and their characters skills to gain clues and piece together what happened, keeping it in the game. My players seem to enjoy this better than most in game puzzles.

Thank you for your comment. Yes this kind of puzzle works great and doesn’t take the players out of the experience. It’s simply a mystery their characters have to solve.

I was planning on writing another article next week about how to make interesting puzzles that work within D&D instead of outside it, but you’ve hit the nail on the head I think.