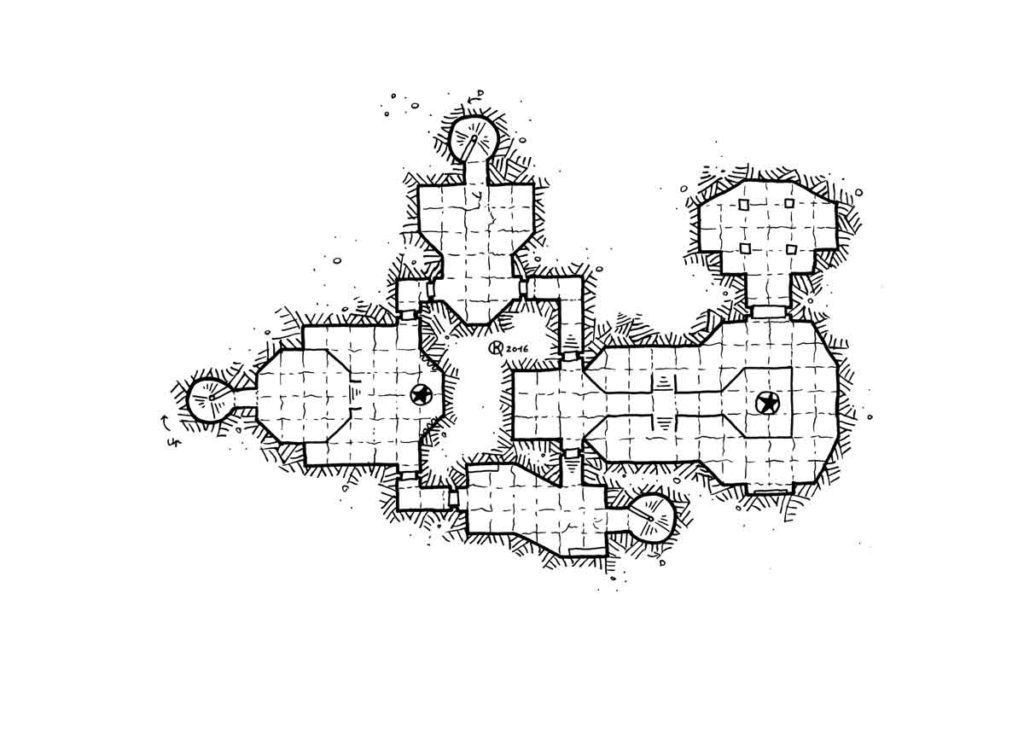 You may have heard of the 5 room dungeon while scouring the internet for ideas for your next session. In this article I will try to assist Dungeon Masters who want to build and run interesting dungeons but don’t have the time, interest or willingness to create a huge dungeon for their players to explore. The 5 room dungeon is also a great design method for groups that don’t really like exploring vast dungeons and prefer shorter ones with an emphasis on story. Of course the method outlined here doesn’t only apply to dungeons. The 5 room dungeon method can be applied to any environment and the “rooms” are more like scenes connected together than actual rooms in a dungeon.

Advantages of the 5 room dungeon

As I briefly mentioned above, this method of building adventures can apply to more than just dungeons. Whether it be a wilderness or urban adventures, you can apply the same principles to building “scenes”.

A 5 room dungeon is short. The benefit of this fact is two-fold. It means that you won’t have to spend too much time preparing a vast construct with a million levels, and it also means that your players can go in and out in a single session. This adds variety to your campaign as the players will get to experience something different each session.

They’re also very easy to polish and make adjustments to. When you undertake the task of creating a large dungeon, your time is spent on expanding the dungeon itself, leaving no time to go back to the beginning and making small (but important) changes. The 5 room dungeon allows for this possibility as you can create a dungeon in 20 minutes and spend the rest of your time polishing.

No more unexplored areas! A 5 room dungeon is one with a simple and direct goal. Your players will get to experience the whole thing. Any interesting idea you put in will be seen and no more will you create something that the players never get to see.

What is the reason that your dungeon hasn’t been plundered by other adventurers already? The first room of your 5 room dungeon attempts to answer this seemingly simple question. A guardian or other challenge at your dungeon’s entrance is a good justification as to why the dungeon is intact. There’s also another purpose to this first room. It keeps players on their toes and helps establish  your dungeon’s theme.

Some ideas for room 1 challenges:

Room 2: A Puzzle or Role-playing Challenge

Once the players have successfully entered the dungeon and succeeded on their first challenge, they are presented with one that can’t be solved simply with brawn.  A puzzle or a roleplaying challenge achieves two things. First, it breaks up the tension and helps with the pacing of your adventure by acting as a tension plateau. Second, it keeps your problem solving players happy by giving them a more interesting challenge.

Room 2 can be switched with Room 1. For example if the entrance to the dungeon was a puzzle, room 2 can be a combat encounter. It might also be a good idea to plant hints on solving the 2nd room in Room 1 after you’ve decided on what the challenge will be.

Some ideas for room 2 challenges:

Room 3: Trick or Setback (Something good happens… but…)

The main purpose of room 3 is to build tension. Do this by allowing the players to feel like they’ve won and then pulling the rug out from under them. Maybe the monster they just fought re-animates after they think they’re safe and is more powerful than before, or the treasure they think they just found is bait for something big, ugly and dangerous.

Whatever you decide on, try to make this room feel different that the other two. This is also a good opportunity to cater to one of your players who likes something different from the others. Of course, this room should weaken the players enough so the big battle in the next room is more dramatic and dangerous. You can also use this room to establish the theme of the final battle. For example, if the final battle takes place on a bridge across the mouth of a volcano, then room 3 should contain a pool or river of lave.

Some ideas for room 3 challenges:

If you’ve ever played any video games then you may instantly recognize the purpose of this room. This is the room that the whole dungeon has been building up to. The fight should be hard and your players should feel that they may not be able to make it. Be as tactical as you can be when running the big bad. The terrain should also be interesting and should provide tactical opportunities for both your players and your villain.

Consider either starting or ending this encounter with role-play. Maybe the villain needs to monologue or maybe he is just pretending to monologue in order to stall for time (to complete a ritual for example). Or maybe as he’s dying, the villain reveals some new and surprising information to the PCs (the ending of the first Mistborn book comes to mind but I won’t spoil it).

Some ideas for room 4 challenges:

Here’s where you, as a DM can have some fun and completely subvert the expectations of your players. This room doesn’t need to be a physical location but can be a revelation made in room 4. It also doesn’t need to be a point of failure for the players. Remember that the purpose of this room is to differentiate this dungeon from any other and to make it memorable to the players. This is where your creativity can shine. It could also just be the room where the players finally find the thing they were looking for or the treasure vault. It’s up to you.

Some ideas for room 5:

And that’s it. You can now create amazing and memorable locations for your players. And remember that just because this method is called “The 5 Room Dungeon”, it doesn’t mean that you are limited to a classic dungeon.

Maybe rooms are just specific areas in a forest or city. Maybe they are not locations at all but events that happen independent of location. You could also use this method to create whole campaigns where every “room” is an act of your and your players’ story. The flexibility of this design method allows for nested 5 room dungeons after all. Anyway, have fun creating!