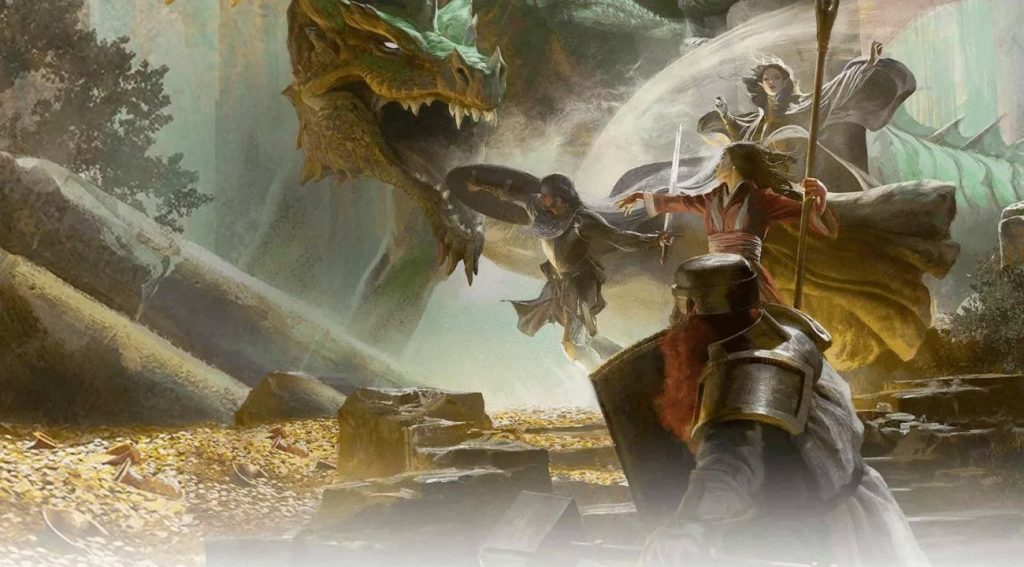 The Coronavirus pandemic has put a sudden stop to many D&D Games around the world. I’ve mentioned in another article how I had managed to keep my game going steady every week by running it as something similar to a West Marches campaign, but when I was writing that article, I couldn’t have anticipated what would come. I’ve moved my campaign to the digital world recently (until the quarantine ends) and in this article I’ll try to give you my opinion on tools and ways to run a D&D campaign online successfully.

The tools that will make running D&D Online possible

When I decided to move my D&D game online, I started messing around with several tools that would make that possible. My requirements were that it should be as simple for my players to just join the game as it would be in our normal game.

Discord is an amazing voice chat application. It has the best sound quality out of everything I’ve tried and other many features that make it the main tool for running your D&D game online. You could use it in two ways, but what I opted for was creating a server so I could add a dice rolling bot and so that I could share my screen with my players. The other way you could use it would be just for voice chat.

For dice rolling I chose the DiceParser Bot because it had the simplest commands in my opinion. As I’ve said, simplicity was the most important factor in my choices. Sharing my screen with discord was also really easy. I happen to have two monitors on my main computer so I just shared one and run two instances of MapTool, one for each screen.

For those who don’t know what MapTool is, it’s an application that fulfills a similar purpose to Roll20, but instead of running in your browser, it’s an actual application that runs on your PC. Though I’m mentioning MapTool here I should warn that it has a really high learning curve and though I love it, I wouldn’t recommend it for this particular purpose.

Roll20 is what many people turned to in light of the Coronavirus epidemic but I have to say I don’t like it at all. Using it for this purpose would require me and my players to go through a process of transferring character sheets and learning a new tool. So I tried it and messed around with it but I wouldn’t recommend it because, and same goes for MapTool, it just adds steps to a process that should be painless.

You probably noticed that even though this article is about running D&D online, there is a distinct lack of recommendations on tools to actually run the game. I mentioned two tools and quickly told you that you should not use them. So without a mapping software, how are you supposed to run D&D?.

That is by design, because I think that this Coronavirus epidemic is a great opportunity to try running Dungeons & Dragons 5e in the theater of the mind. I’m sure you’ve heard that term before and to quickly explain, by Theater of the Mind we mean a D&D game that is run without a grid, nor tokens or miniatures. It is a game that is played in yours and your players’ collective imaginations. Some people prefer this method and others do not, but I think you should give it a try.

I’ve tried running my normal games like that but since I like to encourage tactical thinking in fights, I quickly gave up. But online D&D is, I think, the perfect medium for it. All you need is a voice chat program like Discord and a way to throw dice, which you can add to Discord as I’ve mentioned above.

Tips on running D&D through the Theater of the Mind

My first online game was done with MapTool and Discord. It was ok but I felt like the game got bogged down and sometimes slowed to a crawl. I opted for theater of the mind after that and these are the conclusions I’ve come to.

Don’t throw a ton of monsters to your players as the encounter will quickly descend into chaos. Players will want to fight more tactically in order to better their chances of survival, and the fight will end up being run on a grid even though there is no grid, which over-complicates the whole process and takes away from the fun of D&D. Opt for single monster or generally small encounters that will be easy to understand.

Information is the alpha and the omega when running a game in the theater of the mind. Players will feel cheated if they don’t have all the information. When a player starts their turn in combat, describe what they see from their character’s perspective and add a brief overview of what happened in the previous turn.

DM: Ok it’s Tarumo’s turn. You just saw a goblin run to the bell and ring it, calling for backup you assume. You are also flanked by two other goblins who seem eager to keep you where you are. Elderon is also flanked and he seems to be having trouble. What do you do?

Tarumo: I take the disengage action and run towards the door. I want to try to bar it so that no more goblins can come in.

Without the aid of the map and grid, descriptions become even more important. Keep a list of interesting aspects for each location the players visit. Setting the mood is important in my opinion as well. Since you’ll be using discord you could share your screen and display an image that looks like the location they are currently at. Use this as background though and don’t depend on it. Don’t just show your players the image and go “Here, you see this“.

Though I prefer running my D&D game in person, circumstances have forced me to adapt and as I like to say, even online D&D is better than no D&D. I hope you’ve found this article helpful. Stay safe.