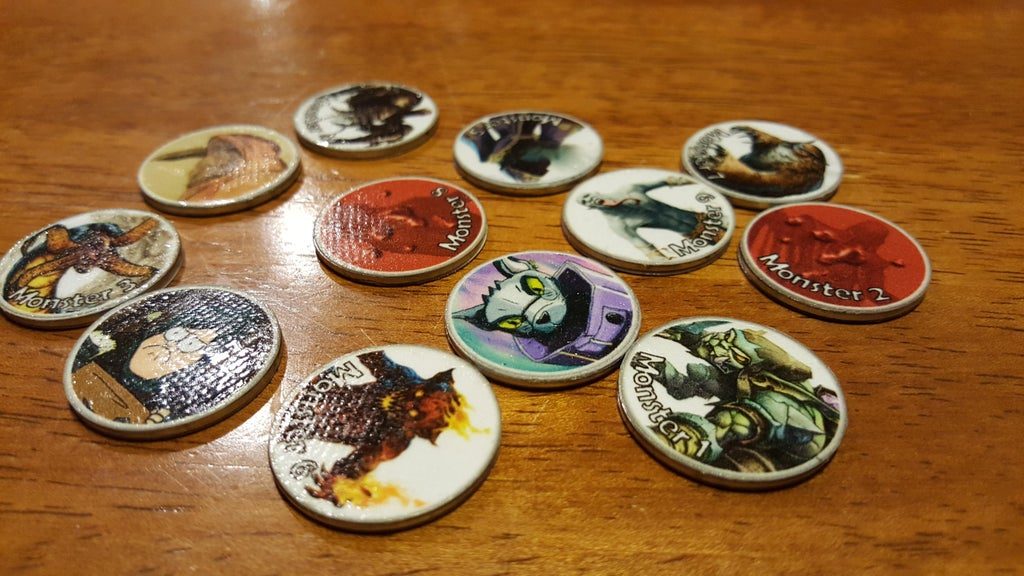 Cheapest miniature alternative that you can make yourself

Let me start by saying that miniatures are awesome. They are a great aid for both the Dungeon Master and the players, as they make fights and scenarios more tangible. You can see the huge dragon in front of you and can be actually scared by it.

Having said that, they are completely optional. And I’m not saying that in a “theater of the mind is better” kind of way (which for some groups may absolutely be the case). They are optional because there are alternative methods to represent monsters and heroes on a grid that are a lot cheaper. I’m talking about tokens.

Will they have the same effect as miniatures on the table? Probably not. Will they absolutely do the job and look cool while not breaking the bank? Yes!

What you will need

The process of making these is pretty straightforward.

I use Token Tool to make the art for the tokens. You may use whatever tool you want but I’ve found this one to be great all around. I recommend also numbering the tokens so things don’t get confusing when there are 10 goblins on the grid.

I then lay them out in a document using tables. Make sure that the dimensions are correct. Medium monsters, for example, should be 1″ or 2.54cm in diameter. I may make them a tiny bit bigger to avoid having to align the perforator perfectly when cutting them. I print them on thick card stock or photo paper. You could print them on normal paper but I think the glue would bleed through.

Then use the perforator to cut 1″ circles from the MTG cards. In my experience I was able to cut 6 circles from every card. There may be a less wasteful way to do it, but for me 6 circles were enough of a yield.

This next step is up to personal preference. I like my tokens thick and sturdy so I glue the 6 circles from a card together. This makes one token. A token per card is pretty OK in my opinion. You can make them thicker or slimmer as per your preference. You should apply pressure while the glue is drying to make them as dense as possible. Watch out for misalignments between the circles and make sure that the glue covers the whole circle.

After the glue has dried, you can glue the art on the tokens. Apply pressure as you did when gluing the cards together.

The process outlined above takes time. You get more efficient the more tokens you make but it still takes time. I find the process therapeutic and I get into a Zen state while making them, but not everyone has that much free time.

So what you could do instead is replace the MTG cards with miniature bases. Gaming shops sell 1″ miniature bases that are either wooden, plastic or acrylic. Using these, you could just stick the art on the top and be done with it.

Acrylic 1″ bases and dry erase markers to the rescue

Another solution I used for a while was getting clear 1″ acrylic bases, and writing on them with dry erase markers. This method removes the whole preparation and if you don’t care about monster art, then it might just be perfect. You also need a lot less tokens because each one is reusable, which makes storage that much easier too.

I’m a sucker for miniatures so as my gaming group became more stable, I could justify the investment. I don’t have a miniature for everything though so I still use the acrylic bases and dry-erase marker method that I talked about above.

I do however still use MTG card tokens, just not for monsters. I’ve made spell slot and inspiration tokens to hand out to my players when needed. They are a great representation of these things, especially for new players.