As I’ve mentioned numerous times I really like the Lazy Dungeon Master method of preparing for D&D but I don’t always follow it t0 the letter. Sometimes I end up spending hours meticulously planning the details of my next session because my monkey brain can’t help but worry that I don’t have enough material. So in this article I will explain my preparation method for last week’s session, which happened to be one of my best games of all time.

The reason that last week’s game was so good was because I honestly didn’t have time to prepare much. Work had gotten the better of me so my a few hours before the game, I actually realized that I hadn’t prepared anything and got really anxious.

The villain and encounters

The first step was to find a villain because I knew that if I had that, I could maybe fit the other pieces together. So I decided that I wanted my players to deal with a green hag coven that had been stealing small children from the local village.

Once I knew that I just googled “hag lair battle map” and found a map that I could use for the final fight. I didn’t have time to prepare for more encounters so I just picked a few fey creatures that would be like random encounters in the forest.

Then I read about the “hag eye” and decided that it would be an interesting to allow the players to fight the hags when they were not at full power because otherwise the encounter with could become deadly for them.

I didn’t want the eye to be easy to access though, so I searched for hard to catch fey creatures that could carry it around, spying at the players. The quickling was interesting. It would adequately annoy the players but it wouldn’t be that hard to kill if they thought cleverly on how to catch it. It also left the option that it could escape open if the circumstances were right.

I also got a few harpies in there in order to pad time and also drain some of the players’ resources. 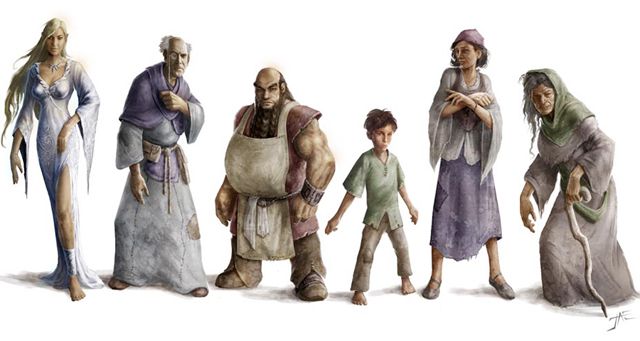 When the story is not too strong, interesting NPCs will make it work in my opinion. So I had to think of at least 2 NPCs they could interact with and I didn’t want them to be just normal quest giver types with no personality; at least not both of them.

So the first was Maria, a local businesswoman that wanted to pay the PCs to deliver some documents to a nearby village in order to establish a trading post with a businessman there.

So as you can guess the second businessman was the other NPC who I decided was trading small children with the hags in exchange for magical trinkets and “protection”. In his mind he was doing a service for the town because this deal would allow the local economy to grow. Nobody thinks they’re the villain in their own story after all.

As I’ve already mentioned, the plot was pretty bare bones and I thought I would just focus on roleplaying and rely on my players to tell an interesting story with the things I put in front of them. That is a good tip for DMs anyway as the story is what happens on the table and not the pages of lore you write.

How the game went

I have become pretty good at improvising descriptions etc. That is because this particular campaign takes place mostly in the same town and surrounding areas so I have created a pretty good mental image of how everything looks and what happens around the area.

So when the game started all I had to do was start talking. I told them that Maria wanted to see them about a job and since these players are pretty enterprising individuals, they pounced at the opportunity. After that I left most of the game up to them.

They went to the nearby village and quickly realized that the guy they were there to see was not what you would call a good guy. The villagers were up in arms about the recent disappearances (mothers crying, fathers shouting) and this guy was trying to calm everyone down because in his eyes he was something of a mayor for this little town.

After a discussion with the PCs, they found out that he’d been selling the children in exchange for “protection” from the Hags.

A few children in exchange for a prosperous town is a small price to pay in my humble opinion. These people are simple farmers and don’t realize the good I’m doing for this town!

I was surprised they didn’t kill him then and there, instead deciding to take on the hags themselves. In this NPC’s mind either the hags would die, or the heroes, and that was a win-win for him.

The players went into the forest, managed to destroy the hag eye and fought the hags, who weren’t too eager to fight in their weakened state. They instead hid and turned themselves into the missing children (the PCs had managed to kill one of the hags so there were only 2 out of the 3 missing children).

To my surprise they didn’t realize that the children were the hags in disguise until later, where they promptly killed them and realized they had eaten the children trying to create new hags.

The most interesting interaction though, was when they came back to town. They grabbed the asshole from before and basically gave him to the mob, making him tell them the truth. They then left the villagers deal what justice they thought was fitting.

Though I know that less prep makes for more interesting games (as this was not the first time a game I had barely prepared for went that well) it helped to again have that confirmed to myself.

It also gave me new respect for the players who managed to create such an interesting and satisfying story with barely 4 index cards of content. As DMs it often feels like we carry the weight of the game and are solely responsible for it going well, but I realized that if I just trust my players, I get a huge weight lifted off my shoulders and both “sides” get to have a lot of fun.