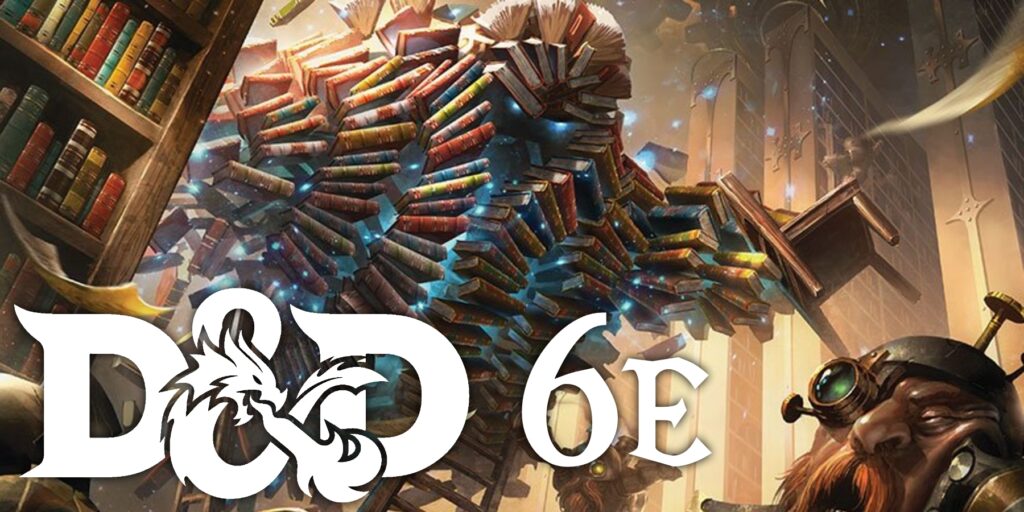 The next edition of D&D

Let me start by saying that there has been no announcement of a D&D 6e or anything like that. The game’s developers have even said that this is not something they are thinking of right now and they are focusing on new 5e content. But it’s been on my mind as something I’d like to talk about eventually and I have some ideas about what D&D 6th edition should look like.

I thought it prudent to start by saying a little bit about the previous editions of D&D and how long they lasted.

Then in 1989 to 1991 TSR released the 2nd edition of Advanced Dungeons & Dragons. This edition broadened the appeal of the game and it was the first introduction to it for many young nerds.

In 2000 and after TSR was acquired by Wizards of the Coast, the 3rd edition of D&D was released, followed shortly after with 3.5e. The 3.5 edition wasn’t marketed as a completely new edition and it wasn’t, but it brought a few changes to the rules with new books. If you consider 3rd edition and 3.5 edition to be different releases, then 3e was the shortest edition of D&D. Most people don’t though.

4th edition was released in 2008, 5 years after the release of 3.5e, with the essential series following 2 years later. 4th edition was my first contact with D&D thought it wasn’t the edition that got me to actually play. I had bought the red box but I never actually pursued the hobby further at that point. The consensus seemed to be that it was a bad edition though that seems to be changing in recent years.

And finally, six years after the release of 4e, 5th edition was released in 2014 after an extensive beta testing period called D&D Next. The edition was very well received and it’s still introducing new people to the game, making D&D more popular than ever.

So considering the above, and keeping in mind that D&D 5th edition has been out for 6 years as of writing this article, it wouldn’t be an unsubstantiated conclusion that a new edition may be coming soon-ish.

Looking back in older editions I find myself admiring some of the design decisions. For example 4e seems like a dream to DM for since it was so (overly) balanced. 3rd edition on the other hand, offered so many options for players that it would be almost impossible to create two characters that feel the same.

Of course, I’m not saying that these systems were perfect. 4th edition was so balanced that it felt more like a video game at times (at least that’s what I’m told), and opening the 3rd or 3.5 edition Player’s Handbook was an assault on the senses due to the overload of information.

On the other hand, 5e completely streamlined the rules of the game while returning to the “feel” of D&D that players had missed in 4th edition. The rules feel simple and are easy to read while creating a character no longer takes all afternoon and can even be done on game day.

There are are a few issues however.

Characters can feel… same-y. A Rogue Assassin is a Rogue Assassin and unless the players manage to differentiate them with roleplay, they will play almost exactly the same on the table. There are, of course, feats but how many of those do you get? 2? 3?

The choices you can make for your character sometimes feel insignificant, and while I understand that the point is for it to be easy for new players to get into, the issue remains that after playing for a while you may feel like you’ve probably tried all the character combinations you’re interested in playing.

On the DM side of the table, 5e is easy enough to run but the monsters seem to be greatly inconsistent, both in power level and lore. You might get a 2 page spread for a monster that’s not really that interesting, and just a few lines for something that could be a BBEG for a whole campaign.  I understand though that this is quite subjective.

The monsters’ abilities share in this inconsistency because in many cases two monsters with the same CR can be entirely different on how they are played. CR seems to be based more on HP, AC and damage output in 5e with potentially TPK abilities not factoring in.

Having said that, I think 5e is a great edition and I’m not actively looking forward to a 6th edition.

Whenever a new edition of D&D comes out, it’s always a bittersweet feeling because many of your books won’t be useful anymore. You’ve spent countless dollars on your D&D shelf and then a new edition comes out and you have to buy new books. It can be disheartening.

That, of course, doesn’t mean that your old books are useless. For example, even 6 years into 5th edition, I kinda want to buy a few books from 4th and 3rd edition to add to my collection (looking at you Draconomicon).

But your Player’s Handbook along with most of your Monsters books (the stat blocks at least) will become pretty much useless. Maybe it’s because I’m newer to the hobby, and I definitely don’t consider it a universal experience, but it worries me nonetheless.

D&D 5e has the potential to be a “living” edition

By “Living Edition” I mean that a new full release of D&D would never actually have to be released. 5e is solid enough that it could be the last edition of D&D. How would that work? Well, the problems I have with D&D 5e are easily fixable with books that add options.

For example there was an Unearthed Arcana release called “Class Feature Variants“. This is, in my opinion, a nice middle ground between what 3rd edition did and 5e. It offers alternative features for players who choose them without being overly complex.

Another interesting Unearthed Arcana was the Magic Tattoos one, and let’s not forget about the numerous attempts at psionic classes or abilities.

A book that focused on these options could look something like a Player’s Handbook 2, and it would completely revamp the game and breath new life to the game without the need for a full 6th edition.

But what about the monsters? Yes I mentioned this as a problem but a new edition isn’t needed to solve it in my opinion. This hypothetical new book could include a list of the overpowered monster abilities with a CR modifier next to each one, similar to the ones in the encounter building rules in the Dungeon Master’s Guide.

They wouldn’t even have to go that far, instead listing the abilities that have TPK potential with a short explanation for each one. This way a DM could quickly check if an encounter is harder than intended.

I’m fully aware that I’m probably overthinking the idea of a 6th edition of D&D. Maybe it’s because I’m newer to the game and have made a substantial investment in the books, and I worry that I’ll have to buy even more.

I’d like to hear the opinion of people that have gone through new editions before, or from newbies like myself. See you in the comments!

Wise words. It is possible that there will be no D&D 6th edition, given how content people are with the game as it is. One thing I would want in a new edition is a switch to metric units. Imperial units are outdated an inefficient in my opinion. I would also like to see more information within each book and fewer books, for so many books is really annoying since you have to buy each individual one. That being said, if you lost one book, it wouldn’t be as catastrophic if that was one of the only books and you just lost critical pieces of information.

I also wish there were more classes. D&D tries to make up for this by constantly adding more subclasses, but this doesn’t really help that much in my opinion. Another thing I’m concerned about is the fact that the different character options you choose are called “races”. This does not sit right with me. For example, when you are discussing with someone there character race, it may go something like this: “Maybe I’ll choose this race for my character.” “No, this race is better.” “There aren’t many people of that race. Look, it’s an uncommon race. We can’t all be members of the same race.”

That sounds like downright racism. I know it isn’t intended to be this way, but it seems so. Why can’t it be called “species” instead? This would be an amazing change for 6th edition.

I agree that the information in the books is too spread out in the 5th edition.

It would be a good idea, IMO, for WotC to make a few special edition books that include information from all the “expansions”. So there would be a new Ultimate Player’s Handbook that would include all the character options included so far in books like Xanathar’s along with spells and magic items. Along the same lines, an Ultimate Monster Manual would include any monsters books like Mordenkainen’s Tome of Foes.

They could market them like Ultimate editions, or Anniversary editions and sell them for close to 80-100$ and people would buy them I think. Especially newer players that might be too overwhelmed with the myriad of books that exist now.

As for classes, it would be interesting to see a few more but I don’t think it will happen. At least not soon. Subclasses are easier to balance for them I would imagine. It also seems that Adventure League informs their design decisions a lot, which would also explain the many different books (PHB + 1 book rule).

As for the races, it doesn’t really bother me that much (maybe because English isn’t my first language so the word doesn’t carry much historical baggage for me), but I wouldn’t mind the change. Pathfinder 2e has already made the change to “Ancestries” instead of “Races” which is a fitting change IMO.

Other than that, I think D&D is a brilliant game and thumbs-up to Wizards of the Coast for making it. They also made Magic the Gathering, which is a really fun card game I play as well.

I used to play MTG too but my addictive personality meant that I couldn’t afford it anymore. 😂

It is a really fun game though.