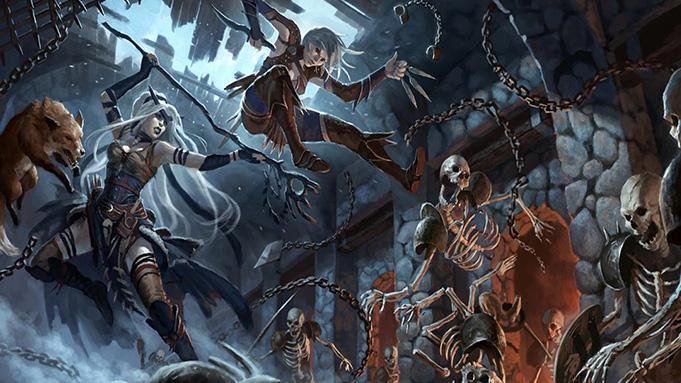 Creating and Preparing an Adventure for D&D

When I started DMing, I faced a roadblock when I decided I wanted to run my own stuff. I had all these ideas for awesome adventures but no streamlined method to write them and run them. Honestly, I was thinking about it too much. If you’ve read my other article on running your first session, then you may realize that the method I outlined there doesn’t change much as you progress in your DMing career.

Chose a theme for the adventure

By that I mean, what do you want your players to feel while playing through your adventure? Is it a mystery? Horror? Dungeon Crawl?

This is where you decide all that stuff. When you do that, it will seem like the rest of the process flows naturally because every decision you make will be in service of the theme.

As an example, I recently run an adventure that both me and my players loved. It started as an idea in my head while in the shower. All I thought was “Frankenstein meets Fullmetal Alchemist”. I don’t want to spoil anything so I won’t go into detail but that’s all it took to get the gears running.

If you’re struggling coming up with ideas, take the time to read your players’ backstories for their characters and incorporate some element of them into your story.

Chose a boss monster or villain that fits your theme

The Monster Manual, Volo’s Guide to Monsters and Mordekainen’s Tome of Foes are all great and really valuable books in my opinion. They might be the most important books you can own. The monster stats are only a small part of their value.

They keyword here is Lore. Read up on the monsters and as you do, ask yourself if they fit with your theme. If they don’t, what changes could you make to force them to fit? I can guarantee that there are monsters in these books that will fit almost any scenario and theme.

Taking my example above, it was very easy to fit the Flesh Golem as the perfect end monster for my adventure. Its CR was a little above to what my players could handle but that also fit the atmosphere I was going for.

Of course, that is just one monster but it’s all we need for now.

This is considered kind of a taboo in the hobby, but I find it valuable if used right, because it helps with later steps.

By Narrative Line I mean the scenes that will take place in your adventure. It might seem like I’m advising you to railroad your players, but I promise I’m not.

These scenes are there only for you. They most certainly not play out the way you write them, but that’s OK because we’re not writing a novel or a short story. We’re writing an adventure. These scenes might play out whether the characters are there or not. It’s a framework for you to work with.

So define scenes, but DO NOT place too much importance to them. This isn’t content.

This is where the previous step comes into play. If you have a loose outline of how the adventure will go, then it will be easier for you to define what locations the characters might go to. You won’t be able to force them to go to these locations, and you shouldn’t force them to go there either, but you’ll be able to sprinkle information that will make them want to go there because that’s where the story is.

The way to define locations is really up to you. You can write detailed descriptions or just a few bullet points. My way of doing this is to write an engaging description that’s not too detailed. That way I don’t feel like I wasted time if my players end up not visiting this location. Writing more loosely also makes a location much more reusable.

NPCs are how the game comes together in my opinion. Have around 3 well-developed NPCs for each adventure (overlap between adventures is acceptable of course). These characters are how the players interact with the world.

The Dungeon Master’s Guide has a very good method of developing them that I’ve found works well for me. Keep in mind that most of who that NPC is, is mostly developed on the table. I’ve had NPCs that after interacting with the players changed completely as to how I had envisioned them.

You should also think about minor NPCs. These are not that important and players may or may not interact with them. Keep a list of names so you can whip one up in the moment. If they players seem enamored by a minor NPC you could just make them a major one by transferring the traits you have developed.

I also like to know what information each NPC is likely to know, but I try to not let this define them. Knowledge and information is not set in stone until you say it on the table. More often than not, what an NPC knows “jumps” to another one if the situation calls for it.

Why will the characters encounter the boss monster/villain? It wouldn’t be interesting for the players to just go and fight the bad guy. But that doesn’t mean that the trip there should be just unimportant filler to reach 4 hours of gameplay.

This is another place where the narrative line I’ve mentioned above comes into play. Have an arc for your story. Put obstacles that make sense and fit your theme (even loosely). If an orc horde attacks a small village, the first thing that would be noticed is missing merchants that were ambushed when transferring their goods between villages. There would probably be an investigation. A friendly to the PCs NPC might ask for them to escort him to the next village and protect him. The orcs might not even know a full on attack is imminent because their chief is secretive or following orders from above him. The players might not know that a big attack is coming until it’s too late.

In every step of the way, they may encounter monsters that might even seem unconnected until they reach the end. Chose them carefully.

In the NPC section of this article, I said that I like to keep in mind (and in writing) what each NPC knows. This, however, is often not used in the intended way on my table. Players might completely skip talking to an NPC or I might just forget that they are supposed to know something. This is why I also keep all the information in a list and put a check mark next to it once it’s revealed.

As I said, information often jumps around, and this is the tool that allows that to happen. If it’s not checked off in the list, then it is not known, and I can tell with just a glance.

However, I titled this section with “Tie it all together…” and that is because this list is probably the best tool in this article. With this list you basically have an outline of your story right there in front of you. You could base an entire adventure around just this list. NPCs, encounters and story could just be improvised on the table if you are comfortable with that.

That is because this list is how the story moves forward. The players won’t be able to move forward without knowing some information and they know that. They will instinctively search for it. They will interrogate the orcs to tell them who is behind the attacks. They will try to ask around in the town in hopes of figuring something out. And you could just sprinkle information, partially or fully, when they do. It’s a necessary tool and it can be used as a reward too, for creative role play.

That’s all I had to say and I hope you found this useful.