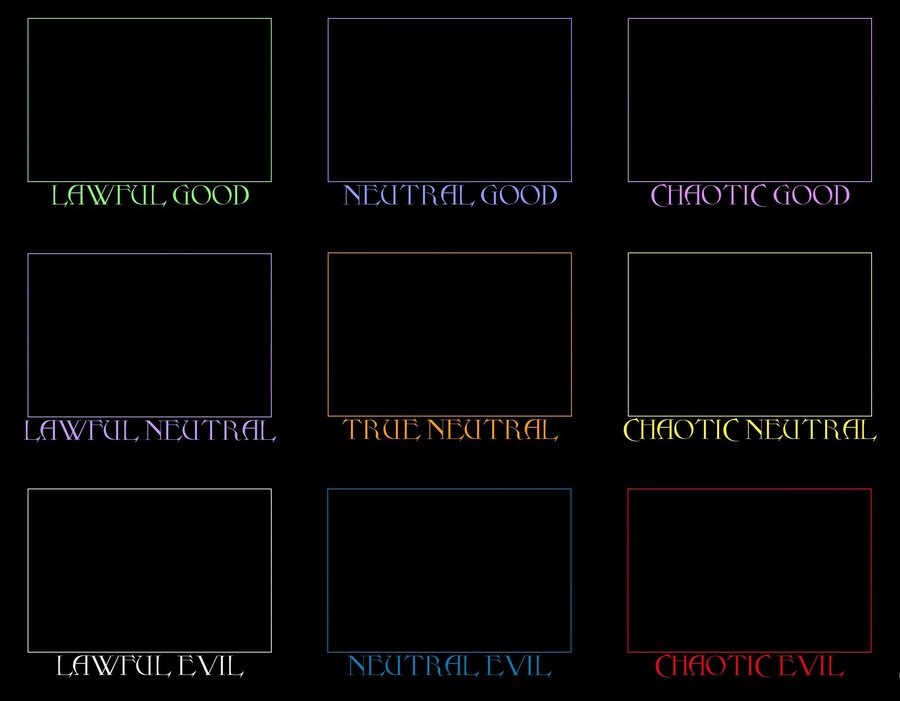 A Few Thoughts on D&D Alignment

I’m not familiar with previous editions of Dungeons & Dragons so when speaking about the great alignment debate that is going on, I will be talking about 5th Edition only. Yes, there is a debate about alignment in the online D&D communities and there are great points from both sides of the argument. Following is my own opinion on the matter.

Does Alignment in D&D matter?

Mechanically? Not really. Role-playing wise? I don’t really think so. Hear me out.

Alignment as a role-playing tool

In my experience, a player character comes into existence not at character creation, but after the player has been playing them for a level or three (depending on starting level). Keep in mind that a player (especially a new player) may have a very little or no idea about what the campaign will be, so creating a character to fit that world is almost impossible. He might want to play a Lawful Good character but the nature of their quest might bring them in positions where doing lawful stuff might just hinder the party’s advancement or land them in a jail cell.

Of course, characters don’t always need to fit the world they exist in and heroes are usually people that fit that description as extraordinary individuals. And the nature of the campaign might be established in a session zero. But I think that a player doesn’t really always know how to play a character until he has a good idea about what the campaign or setting is.

So does that mean that alignment is useless and that you shouldn’t allow it in your games? Well, no. If a player has a pretty good character concept in their mind, refusing to let them chose an alignment won’t be productive. Just let them do what they want because they will probably play alignment well, since they have such strong feelings about it.

But in the end, it doesn’t really matter. Alignment has been, at least in my games, just two words on the sheet. I don’t feel like enforcing alignment-like behavior on my players’ characters. This way the characters will evolve as the game does, often jumping between different alignments. An evil act may make a player feel guilty and start a journey of redemption for example something they might not had done if they were restricted by those two words.

In my own custom character sheet, there is of course a field for alignment but my party never uses it. It’s there for those of you who choose to use it and for historical reasons of course.

Alignment as a DM tool

By that I mean keeping a mental or written note of where the party stands alignment-wise, and construct the narrative in a way that might make more sense to their current standing. A heroic adventure where the heroes are called to save a kidnapped girl might get wasted on a party that would most likely kill the girl to avoid escorting her back in town, and then blame the goblins.

The world will also react differently to an evil party if they don’t take action to hide their true nature. In a lot of cases the players may not even think they are doing evil deeds, and might break into the shop owner’s home and steal his stuff just because they can and the game allows it. Confronting them with that reality by, for example, having the shop be closed due to bankruptcy brings them face to face with the fact that their actions have actual impact on the world and on the NPCs.

The villain might react differently to a party that has killed and plundered as much as his minions have.

Something I’ve toyed with but haven’t yet tried is to “steal” a PC when they have done sufficiently evil things if we’re playing on a good campaign. By stealing I mean narrating that PC leaving the party in the middle of the night to join forces with the Evil Lord. I’m still thinking about it because I’m against taking the agency from a player but it could probably work if you talked about it with said player, and giving them an interesting arc to play out, where they make a new character and hunt the traitor. Confronting the traitor in that instance would be interesting, since you could allow the player to play both characters.

In this article I tried to think of ways that alignment could be useful and the only cases I came up with where scenarios in which a player choosing an alignment and actually sticking with it is not a requirement. There are many creative ways to use it as a DM though, probably many more than what I’ve written, so go nuts!